Many actresses and Item girls of Bollywood become victims of Wardrobe Malfunctions many times. This time it was the turn of most buzzed Item Girl of Mumbai – Rakhi Sawant. Just recently, the actress held a Press conference in J W Marriott Hotel of Mumbai. The conference was to promote her upcoming movie ‘Loot’.

Bollywood Actress Rakhi Sawant was dressed beautifully. As always known for wearing short dresses and attracting the youth, the girl was in her similar type of dress. Item girl was wearing a red color tight top and mini skirt. 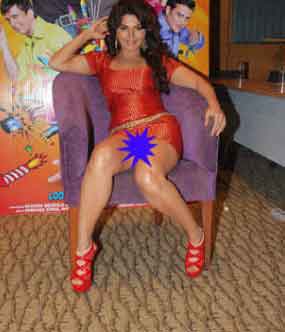 The lady was looking beautiful. The press reporters were taking her snaps and were asking her questions regarding her coming film ‘Loot’. The actress was responding to all the queries and was providing her best efforts to promote her movie.

More on Ms. Sawant,
• I want marriage with Ramdev
• Someone stole my saree

The lady, who generally does item songs, crossed her legs and in this crossing, her mini skirt went little up. The skirt was already very short and when she crossed her legs, the panty of the lady became visible.

As soon as it became visible, the photographers clicked on their cameras several times and the panty was captured in their cameras.

With this incident, the name of Rakhi is also attached in the victims list of Wardrobe Malfunction.

I can’t say if the actress deliberately showed her inner clothes or if all this happened by chance. The reason for this is that this Bollywood Item songs woman always wants to remain in the news and for this; she always tries to find something different that she can do so that she can be in the news. Such activities she organizes time to time.

I can guess that after becoming victim of Wardrobe Malfunction, the actress Rakhi has generated huge promotion for her new Bollywood film.