American man Curtis doesn’t eat anything in the whole day and even not drinks anything, except the breast milk. Curtis is not a small kid but infact a young man who is a husband and also a father of 9 months old baby girl.

When the baby girl was born, Curtis decided to stop eating or drinking anything and to survive only with the breast milk of his wife Katie.

Curtis has further revealed that he will not eat or drink anything in the future also. But he also stated that the number of days for which he will continue to have breast-milk is upto when he can continue easily. If he will feel sick and will think that he can no longer continue with the breast milk then he will be on his regular diet. But he just wants to see that for how many days, a person can go on the milk of women breast.

Curtis and his wife Katie also made a blog and used to share their experiences with the women-milk but now Blogger has removed that blog altogether. 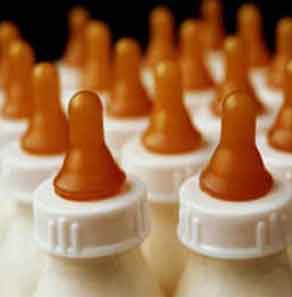 The American man is saying that he is feeling very healthy by inhaling his wife’s milk. His weight is 185 lbs and has a height of 6ft and 4 inches. He says that a man like him needs around 2k daily calories and for this, he drinks something 66 ounces of his wife’s milk daily.

He said that Katie has many dozens of milk-bottles that she has kept in the refrigerator for her 2 other kids. The father fears that those bottles could go in vain and so he has decided to go with this liquid diet.

Curtis further adds that he likes the taste of his wife’s white liquid more than that given by any cow or buffalo. He adds that this lady-milk is sweeter than that of buffalo’s or cows.

American person Curtis shares his first day experience by happily saying that his first day started in the noon and he was able to drink only 44 ounces of white liquid.

The father adds that he does not feel hungry after inhaling the breast-milk and infact feels very good. She is thankful to his wife for this.

Katie says that initially she wanted to donate her blood but was not able to make it and now her milk is proving helpful for her husband.