On one day, the little boy Jai, who is just 2 years old, was eating the peanuts happily. His parents gave him these peanuts to eat. He was very happy and was enjoying with her parents. The attention of his parents was deviated for some time and in that period of time, Jay started eating bunch of peanuts in one go. He was doing this just out of mischief and fun. 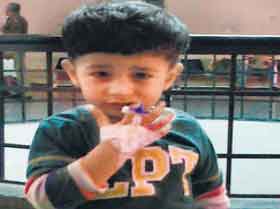 But that mischief proved dangerous for him. He got some pain and started to cry. The parents, when heard their son crying, came to him and tried to console him. Soon, they saw that their son Jai is having pain in breathing. They realized that they should consult the doctor else anything bad can happen.

Jai was admitted in the ENT department of SMS. The doctors gave some medicines, kept him for 24 hours and then discharged the kid.

The parents realized that their kid is still experiencing pain and then they took him to Fortis. Dr. Sanjay Chaudhary treated the boy but the pain still existed. The parents then consulted Uniyara Hospital. The treatment went for 2 weeks but there was no output.

Jai is now alright and is feeling healthy.