Can you all believe that a person cut the fruit and he sees GOD inside that fruit? I know that no one can believe on this news, atleast in today’s era. This might have been successful in ancient times but in today’s age, this is impossible. But to make you in surprise, a family living in Sarni, Bhopal, Madhya Pradesh saw Hindu God Ganesha in the papaya when they cut it to eat.

Some days back, Munnalal Pawar purchased a papaya from the fruit-market of Sarni. He bought it for himself and for his family-members. His little daughter love papayas and so he brought this for her so that she can eat it, enjoy and have fun.

He brought the papaya, washed it properly with water and then placed it in the refrigerator. He thought of serving it chilled. After some hours, he asked his little daughter to bring that papaya so that all of them can cut it and eat it. 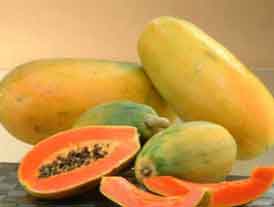 The daughter took the papaya happily from the refrigerator and gave it to her mother. The mother brought a knife and started peeling it. After the peeling process, the lady cut the fruit into two pieces.

When the lady separated both the pieces, she was surprised to see a structure resembling Hindu God Ganesha. The husband saw that his wife is in a strange situation. He came near his wife and asked her the reason for the same. The lady showed Ganesha to the man. The man at once folded his both hands and then started chanting and praying to God.

More to check,
* Read here for – Lady sleeping with snakes.

The man and the woman soon told this to their neighbors. All the neighbors started gathering at the home to see God in fruit. All got surprised to see that godly figure. The people started bringing food and money for the Hindu God.

I can’t say whether real God is in fruit or not but I can say that with this, the man is getting huge sum of money.