In school or college days, sometimes the students who are not well prepared for their examinations dream of their exam to cancel. Some want that the intelligent student should sit in front of them so that they can copy his/her paper. Some dream that any tragedy should happen so that the exam is postponed the next day.

But just dreaming can’t help anybody. They should work hard in order to pass with good marks and get good result. Intelligent students work very hard and so they become happy when the exam-period is just to start.

But a strange thing happened in Ahmedabad, Gujarat of India when one of the school-boy who was not prepared for his paper spread a rumor. He made a plan with one of his friends. When the guy reached the school and the time of exam was near, the principal asked all to come out of the building.

All were surprised to see that the principal was very much frightened and was shouting to all to go away from the building. She said she has just received a phone call from a man who is claiming to have a bomb planted in the building.

She called the police. All the boys and girls were sent back to their homes. Only teachers were staying there. The police came and started investigating. The team analyzed and concluded that the phone call was fake and there’s no such bomb anywhere. 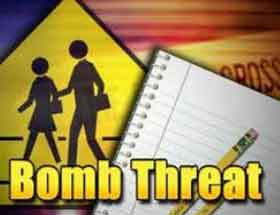 The police then started tracking the call. They researched that the call was done from a local mobile and the defaulter boy’s friend was arrested. Soon, the boy was also sorted out. He accepted his fault.

Both the boys felt sorry and assured that they will not repeat such activity in the future. They asked the teachers to forgive them this time and not to tell this incident to their parents but the administration didn’t listen them. Whole staff was very angry with them.

The cops arrested both the students and took with them to the police-station.