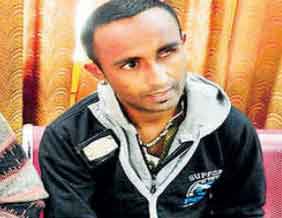 This was something about the people of this district. You know that such human beings can be found at many places in the world but here we are going to tell you about a man who has so much inclined towards these dangerous drugs that he is now unable to live without them. Even chars, cocaine, alcohol and smack is unable to give him the dose that he needs. So, in order to fulfill his daily dose, he has invented a new way of fulfilling his desire of inhaling intoxicants.

The man Paramjeet Singh bites himself from snakes and inhales the sweat of frogs in order to calm down his narcotics desires. He knows that in this dangerous way, he can even lose his life but then also he is unable to leave this dangerous way as he has become addicted to these drugs.
Also see,
• Man biting python

He catches the snakes from the nearby forest and then bites himself with the snake’s tongue. He keeps the snakes in his home itself in a special box. He has many types of snakes in his home and he keeps on changing the snakes daily to get daily new dose of drugs and so that he can try something different daily. As per Paramjeet, for biting himself from snake, he ties his both legs with a rope and then bites his thigh from the snake. Then he opens the rope slowly. He said that one snake-bite gives him dose for around 30 days. Once he gets a bite from a snake, he can go without any intoxicant for the next 30 days.

For frogs, he has made a special garden in his home in which he keeps various frogs. He then runs shouting after them. The frogs run quickly in order to escape from him. In this running, the frogs sweat and the person then collects the sweat in a vessel. He then inhales this sweat and in this way, completes his intoxicants desire.

The Indian man told that sometimes, when he wants to try something new, he goes out and gives snake-charmers 35 rupees for one snake-bite.
See,
Woman who loves snake

On being asked that how he became so much addicted to drugs, he said that during his school time, he started smoking cigarettes and as the time passed, he demanded for more drugs. When the alcohol, cocaine etc. failed to provide him the enough dose then he invented the frogs-sweat and snakes-bite to satisfy his intoxicants desire.

Besides snakes and frogs, he also uses lizards for fulfilling his bad desire. He catches 20 lizards and then keeps them in a box which he opens after 20 days. After 20 days, he frees lizards and gathers the wastage and excretory material of those lizards. Then he fills that wastage in a cigarette and smokes that cigarette.

The United States has many addiction treatment centers serving the needs of thousands of drug abusers. Other countries, however, do not have much in the way of such facilities.