One of the biggest news Twitter feed Foxnews.com reported on Monday was about the death of US President Barack Obama. This was the biggest shock for everyone and people started sending console messages to each other.

The vice president of Fox news Jeff Misenti has apologized regarding this from all and has also asked the Twitter team to investigate that how this happened and their account was hacked. Jeff has further asked the Live-Updates company to check that from where the tweets were sent to all. Misenti asked to record its ip, location etc. details so that the defaulters could be arrested.

The company further said that all measures must be taken to prevent such unauthorized news as this is the most sensitive issue as it involves the World’s most powerful man, the US President Mr. Barack Obama.

These rumored tweets remained on one of the widely used social networking channel for hours and then they were completely removed as these are someone that deteriorate the image of the strongest country of the world – America and its leader Obama. Some of the initial messages were up for around 8 hours.

Please see the below image which shows the wrong doing of the defaulters. 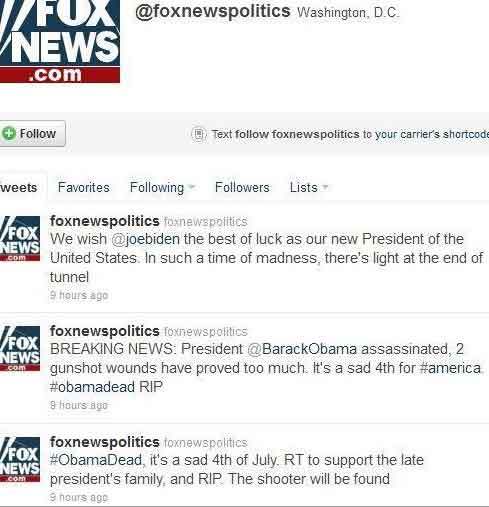 The Fox-News sent an apology message on its Twitter account. The reports were 100% incorrect as when the death rumors were spreading everywhere, the USA leader was enjoying his holidays with his family. And he was also surprised when he heard his death-news.

He is hearing from others that he is been shot by some people and now he is no more. Even his seat is occupied by some other politician joebiden as new head. Isn’t it strange?

The hackers consoled the man’s family too and tweeted that all are with them in this bad time. They should keep control over them at this moment of time. They also asked the new head to take care of the worsen situation and punish the criminals at the best level.

These rumored messages created a tense atmosphere all over the world. The news spread as forest fire soon and all television, websites were showing this and reporting this as false.

No doubt these were false but the Fox news site created a good publicity with this. Even their twitter followers grew from 33k to something 37k within few hours and people started visiting their account. The website also generated enormous hits due to this news and they got new visitors free of cost and that too in bulk. Their analytics graph increased and almost erected compared to last run.

The individual persons also tweeted the same message to their accounts and within a short span of time; these hacked messages became one of the most tweeted tweets.
The first fake tweet was posted around ET 2am in the morning.

People were very much surprised when the TV reporters reported him as safe and wished him a good future. These tweets created an environment of mockery, fun and criticism all around as it involved the insult of biggest developed nation USA and the country that is considered as the most rich and successful today. So, obviously it’s a matter more of insult and all measures should be taken so that it may not repeat at any times.