Carl Griffiths, a young man from United Kingdom, is very much popular now-a-days, and especially among the girls. The reason of popularity is not that he is very smart or any type of popular hero. The reason is that he wears the shoes of size 21. His foot is very large and the girls love it.

It is a common mentality of most of the girls that the man who will have the big feet will have big sex-organ and they love to go bed with that man. As Carl Griffiths has the biggest feet than any other man that the girls found in their neighborhood, so they love to have sex with him. 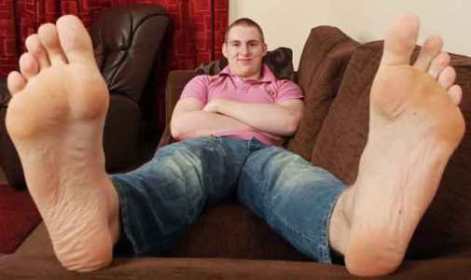 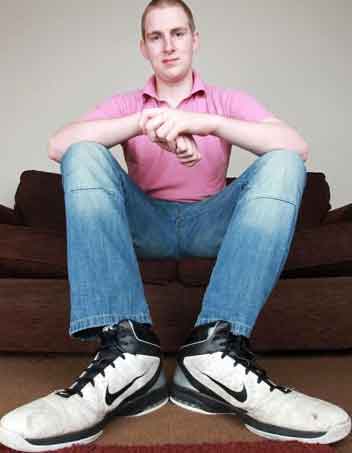 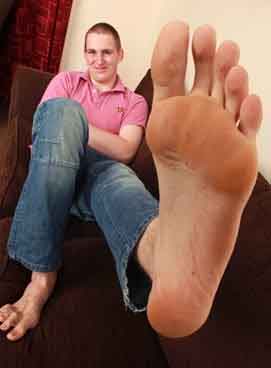 Carl Griffiths, who is from Trimsaram, South Wales, UK, is just 19 years old boy and is gaining popularity among the girls at a rapid pace. His shoe-size is 21, which is more than the double of the shoe-size that the common man of United Kingdom wears, which is size 9.

On being asked that so many girls float around him and all want the same thing, so doesn’t he feel insecure from other jealous boys; Carl says that no one dares to touch him at 6ft and 5 inches.

But inspite of so much sexual appeal, he is unable to get a good girl-friend. The girls come to him for just to sleep. After passing their night with Griffiths, the girls go away and do not become his girl-friends. This is the thing that is annoying the young boy.

The UK man says that at 19 years, it does not bother him sleeping with each new girl in the night and go bed with her. He does sex with the girl and in the morning, the girl leaves his bed and goes to her home.

Carl says that since childhood, his feet are growing the same way. While he was in the primary school, he always wore 2 sizes big shoes than his class-friends. He said that when he was just 12 years old, he used to wear shoes of size 14.

One being asked that whether he is happy with his growing feet, Carl Griffiths said that he is happy but the problem arises when he has to buy new pair of shoes. In United Kingdom, he is unable to find his desired size and so he has to ship them from United States. He gets the shoes shipped from United States but the problem comes in payment. He has to pay 100 pounds for one pair of size 21 shoes. 50 pounds is the cost price and 50 pounds is the shipping cost.

Another problem that he faces is that some clubs don’t allow him to enter and play as sometimes, he has to go bare-footed as his shoes have to be ordered specially from America.

As per Guinness Book of World Records, they do not have any record for the biggest feet of Britain.