A Taiwan Magician Cho Sheng-keng set a world record for being buried alive in sand for 100 hours.

Cho was buried in 3.6 tons of sand inside a kiosk in Taipei Park, Taiwan, Thailand on Sunday, 29 May 2011. He was removed from this sand on Thursday, June 2, 2011. He continuously remained for around 100 hours in the sand.

During this period, he breathed through the two openings. He had 2 tubes through he was able to get proper air and water. He survived only on water and air.

Proper arrangements were done to see that he is not in any danger at any point of time.

The members of Mirror Theatre, his Magic Troupe and other organizers were continuously monitoring his heart-beats, breathing and body temperature. They said that they were fully prepared to break the glass, if any point of time they see that there’s any danger to the magician’s life.

The main aim of Sheng Keng was just to set the World Record and enter his name in the global records book.

When Keng came out of kiosk on Thursday, huge crowd of press reporters and common people joined in welcoming him to set such a great adventure. 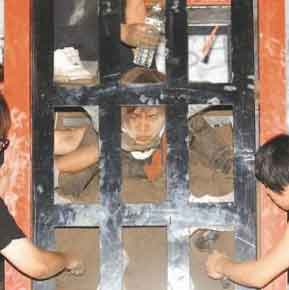 He was looking completely exhausted and his skin turned little pale. But he greeted all the audience and passed a tired smile.

He was immediately taken to a hospital for a medical checkup. Doctors said that he is having dehydration and is feeling somewhat feverish. They said that apart from these normal symptoms, he is perfect and his body is working normal.

Cho is popularly known by his stage name Igo.

During this period of whole adventure, he was continuously shaking his hands with passing-by visitors. This was a signal to greet him and it also resembled that he is alive.

Cho Sheng-keng beared the cold and rain of the weather during this adventurous stunt.

His stunt is overall captured in a video and Guinness World Records is being asked to record his name in the book.