Can you believe on the news that a boy is so desperate for getting iPad2 that he can even dare to see his body organ for it.

Xiao Zhang, a high school 17-year old student from Anhui Province in China sold his kidney to a local hospital.

The boy read an ad online on internet in a website that claimed to give money if one is willing to donate his body organ.

Zhang said that he wanted to buy iPad2 but he was not having the money to buy it. And when he saw the advertisement online about an agent who was claiming to give 20,000 yuan ($3,084.85) for one kidney, he at once thought of selling his one kidney in return of this amount.

So, as per the deal, he traveled to the city of Chenzhou in Hunan Province. His body kidney was taken out at a local hospital and he was discharged after 3 days from the hospital. The doctors gave him 20,000 yuans as per their deal. 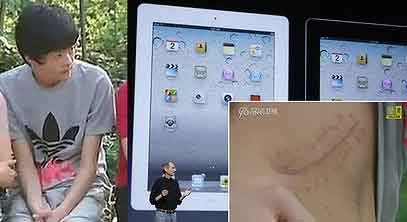 When the boy returned home, his mother saw a brand new Apple mobile and a Laptop in his hands.

His mother Liu saw the red scars on her boys’ skin and when she asked him about how he got such scars and so much money to purchase such costly electronic gadgets, he admitted that he sold one of his kidneys.

The mother was shocked to hear what the child said.

She took Zhang to Chenzhou and reported the crime to the police. But all the three agents’ cell phones who prepared Zhang for selling the kidney were unavailable.

Even the hospital that the boy said removed his kidney denied of any such surgery.

In China, trading organs is a common practice. The government is trying their best to stop it but despite all the efforts, this illegal inhuman work is followed at a mass scale in the country.

As per a report, around a million Chinese need transplantation every year but only 10,000 of them are able to receive the organs. Much of it is being exported illegally. And in this business, many doctors, politicians and govt officials are also involved.

Last year, a Japanese television reported that some people have paid 50,000 pounds to one Chinese agency for exporting new kidneys to them.

People are blaming the country’s education for this child’s foolishness. They are saying that it’s a proof that China’s people morality is decreasing day by day.

The government should seriously think on this and should take some strict measures to improve the children morality.