Avtar Singh Nagla is a politician from Zirakpur, Punjab. He fought 2007 State Assembly Elections but was defeated in that.

Last night around 11 pm he climbed a tree and is still on it despite all efforts by his friends, family, local police and neighbors.

He said that he will not come down until Punjab Chief Minister Prakash Singh Badal comes and listen to his grievances. He blamed that Badal is becoming deaf from common man’s problems. He sits in his AC office and only comes to public when he needs votes. After we give him votes, he is seen nowhere near poor people and infact forgets them.

He said that Punjab government had given many acres of land to a paper mill company on lease in order to provide employment to the villagers but the company sold the land to a property dealer without any intimation to the villagers. He raised his voice but no one listens him. So, in the end he has to take this decision. He said that he is left with no other way to make Badal’s ears listen his voice. He now wants to talk Badal face to face and ask him the reasons for the same that how without government’s knowledge, the paper mill company can sell the land further to a third person which was meant for villagers. 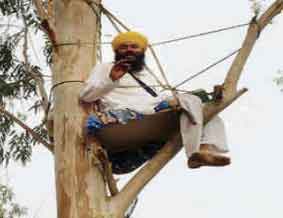 Police officials said that they have done their all attempts to make him come down but he is refusing clearly.

Avtar Singh Nagla had done full preparedness for climbing the tree. He had taken lots of eatables and drinking water with him. He had taken his cell phone with him with whom he called the media to let the voice and sufferings of common man like him fall into Badal’s ears.