Yesterday on 22 May 2011, Sunday, Taliban militants started attacking the naval air base in Karachi, Pakistan. They had rocket propelled grenades and automatic weapons. The base was located in Karachi in the Arabian Sea Port. The explosions lighted the whole dark night. In return, Pakistan opened fire at them. The serious battle continued for around 12 hours upto Monday morning. US people work at Mehran. and the United States Embassy confirmed that all US people are safe.

6 Navy men and a Paramilitary Ranger are killed. Many are injured. However, there was no news if any militant is killed or not. Since no civilian enters that area, so there’s no news of any civilian death. Along with this, one US made maritime surveillance and Antisubmarine Aircraft P-3 Orion that they purchased from America last year was also destroyed.

Pakistan Taliban spokesman Ehsanullah Eshan said in a telephone interview that the attack is a revenge of the killing of their leader Osama Bin Laden on May 2, 2011 by US Seal Commandos. He said that his team can further attack anyone and at anytime. At present, they have so much supply that can continue the fight for continuous 3 days. And till then, they will get more weapons and destroying weapons etc.

The fight continued whole night and by Monday morning, the Pakistan’s helicopters were hovering around the base and hundreds of commandos and soldiers were seen at the base in order to stop the militants’ destruction. The country’s expensive aircraft was standing at the base and all measures were taken by local government to safeguard it so that it’s not destroyed in the clash.

Irfan ul-Haq, Navy man of Pakistan said that 10-15 militants got into the naval base Monday morning. Then they divided themselves into 4-5 small groups, with 3-4 men in each group and started throwing the explosives. They began this around night 10:30 pm. This raises the question if they are getting help from the navy inside. 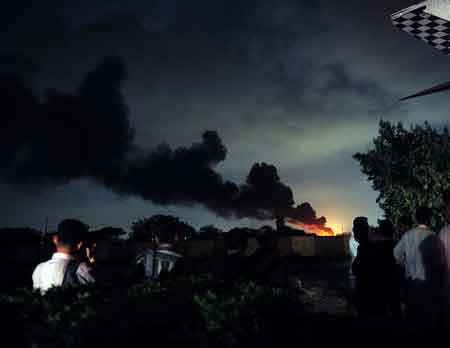 The military force of the country is facing the criticism from the day when America killed Osama. Questions as why they were not able to find the terrorist from their home country when people that came from another nation (USA commandos) did this. Also, why they did not kill Laden or handed him to United States.

Interior Minister Rehman Malik added that the militants were in control of a building on the base. But he added that no man was made as a prisoner by them. He added that to safeguard any civilian is their foremost duty.

The local TV channels were showing the images of flames coming out from the Naval Station Mehran, that’s located inside the larger air force. 13 explosions in continuous 3 hours shaked everyone. The ambulances formed a queue outside the base. The gunfire voice was heard throughout the whole night. The rescue team also reached at the spot.